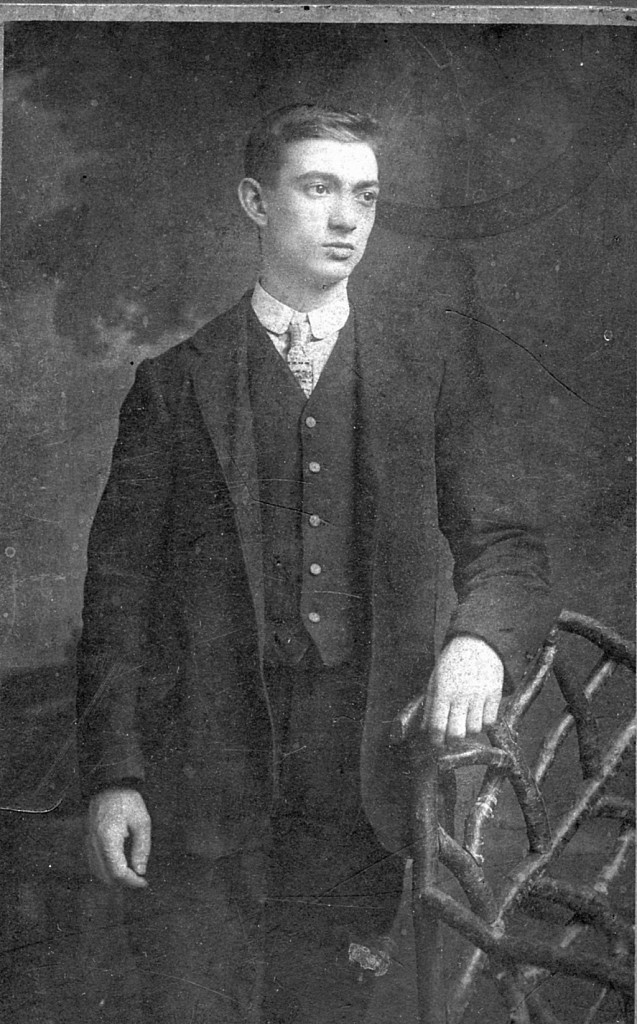 From Manchester to Gallipoli

James Rigby of the 6th Bn. D Coy was killed in action in the Great War after the Landings at Suvla Bay, Gallipoli in Turkey on 9th August 1915.

He is my Great Grandfather on my father’s side of the family and was born on 21st July 1891 in Sheffield, Yorkshire.

Right from the first day of the war 28th July 1914, British newspapers appealed for young men to join the colours. The Secretary for War, Lord Kitchener, advised the government to raise a huge volunteer army to tip the scales in Britain’s favour as the war progressed.

Thousands of young men came forward and when the news of casualties and of the retreat from Mons arrived in late August, more volunteered and this is when James Rigby volunteered.

General Hamilton with three more Allied Divisions, tried to outflank the Turks on Gallipoli with further landings on the 6th August 1916. These took place just to the north of Anzac Cove and the ANZAC forces, at Suvla Bay, with the aim of reaching Sair Bair. In the face of the Turkish Fifth Army, which by then 13 divisions strong, the attempt failed.

Formed at Carlisle in August 1914 as part of K1 and attached to 33rd Brigade in 11th (Northern) Division. Moved to Belton Park near Grantham for training. Moved to Frensham, near Aldershot in mid April 1915 for more training. 30th June orders received to prepare for active service in the Dardanelles, where the original Expeditionary Force was being considerably reinforced in the Gallipoli Peninsula.

The 6th Battalion marched to the railway station at Farnham and proceeded by train to Liverpool, where the Battalion embarked in the transport Empress of Britain (below) on the night of 1st July 1915, escorted by two torpedo boat destroyers until off Ushant (an island off the west coast of Brittany forming the north-westernmost point of France). The Straits of Gibraltar were passed through by night and Malta was reached on the afternoon of the 8th July and three days were spent there, after which then the flotilla sailed to Alexandria in Egypt.

The voyage continued to Mudros Harbour in the Island of Lemnos near the Gallipoli Peninsula. 33rd Brigade went on the Helles to relieve the troops currently needing rest where on 20th July the Battalion were transhipped to the Whitely Castle and Partridge. Upon reaching Helles the next day, were landed there in three parties by the hulk of the River Clyde. Just after the first party were ashore the other two had to put back, owing to the Turks opening a heavy shell fire, and these landed later under the cover of darkness. 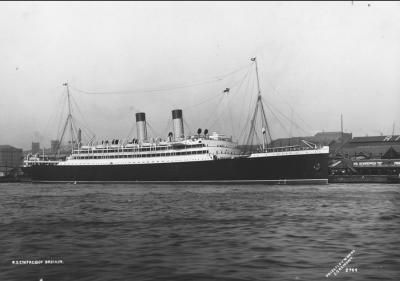 Battles and Engagements during his service

6th Rest Camp. Embarked on board destroyers about 5 P.M. and landed at a point just South of SHULA BAY, Gallipoli with the remainder of the 11th Divn. about 11 P.M.

Regt. in Divisional Reserve with the Lincolnshire Regt.

7th At dawn Battalion had not reached appointed position and dug itself in behind Lala Baba – Shelled about 6 a.m. 1 Killed & 22 wounded

At 5 P.M. Battalion moved out of its position to support Lincolns Regt. engaged on the right attack on the Turkish entrenched position at YOUGHLIN BORNU – A & B Coys moved up in support of Lincolns immediately after the position had been captured and helped to consolidate – C Coy partially coming up on the left of the position D Coy remaining until 10 PM as local reserve on account of threatened danger to the left flank. moving up under the Commanding officer to the H Qrs of the Lincoln Regt about midnight.

The day James Rigby (D coy) was killed…
9th At 1.45 am the Battn left bivouac accompanied by 6th Lincoln & marched to YILGHIN BURNU reaching positions for deployment just North of this point at 5.0 am where the two Battns were joined by the 7th South Staffs Regt who were bivouacing there. The advance started about 5.0 am C & D companies forming the firing line & supports. C on the right & D on Left. A & B were Battn Reserve. 3 Machine Guns under Major Bridges were attached to the Battn. The advance proceeded in a satisfactory manner till 6.30 am the firing line reaching the nalla near ISMAIL UGLU TEPE. The Left at this junction about the reglon of KANLI KEUPRU DERE was driven in, the enemy coming on to Hill 70 & the heights of ABRIKJA thereby enfilading the left of the Battn attack. A & B Companys were pushed into the firing line. Battn Headqrs were formed along the road just North at TORDUT CHESHME very heavy enfilade fire from enemy machine-guns was experienced & the firing line became divided into isolated groups, no supports coming up. A further retirement on the Left caused the Commanding Officer to collect as many men he could along the road about TORDUT CHESHME. This line was held all day until 5-0 pm. A large number of men had been killed & wounded along this line by machine-guns.

At 5-0 pm the remainder of the Battn & one Company of the Staffordshire Regt retired about 150 yds & occupied an old trench & dug in. Casualties being Officers:- 12 killed, 4 wounded, 1 missing. 20 Officers started the attack (see Appendix) Casualties Rank & file:- Killed 26 Wounded 241 Missing 131. 696 men started in the morning with the Battalion.

10th The whole of the day was spent in the occupation & consolidating the trench along our line Col Broadrick being in charge On the evening the 53rd Division made an attack on Hill 70. During the night of 10th& 11th heavy firing in our lines on both sides by regiments on our Right & Left but there was no general attack by the enemy. Casualties 1 man wounded.

11th Day spent in same trenches working in consolidating our line, during the two days previously several wounded were brought in.

Next of kin to Pte. James Rigby received a memorial plaque made of bronze featuring Britannia and a lion with the words “He died for freedom and honour”. 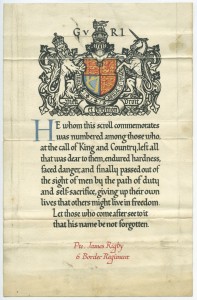 A commemorative scroll was also given to the next of kin along the bronze plaque. The scroll would be printed on high quality paper, size 11 x 7 inches (27cm x 17cm).

“He whom this scroll commemorates
was numbered among those who,
at the call of King and Country, left all
that was dear to them, endured hardness,
faced danger, and finally passed out of
the sight of men by the path of duty
and self sacrifice, giving up their own
lives that others might live in freedom.

Let those who come after see to it
that his name be not forgotten.”

It seems like his body was not recovered, so he is commemorated on the Helles Memorial Panel 119 to 125 or 222 and 223 rather than an individual grave. See below from the CWGC. 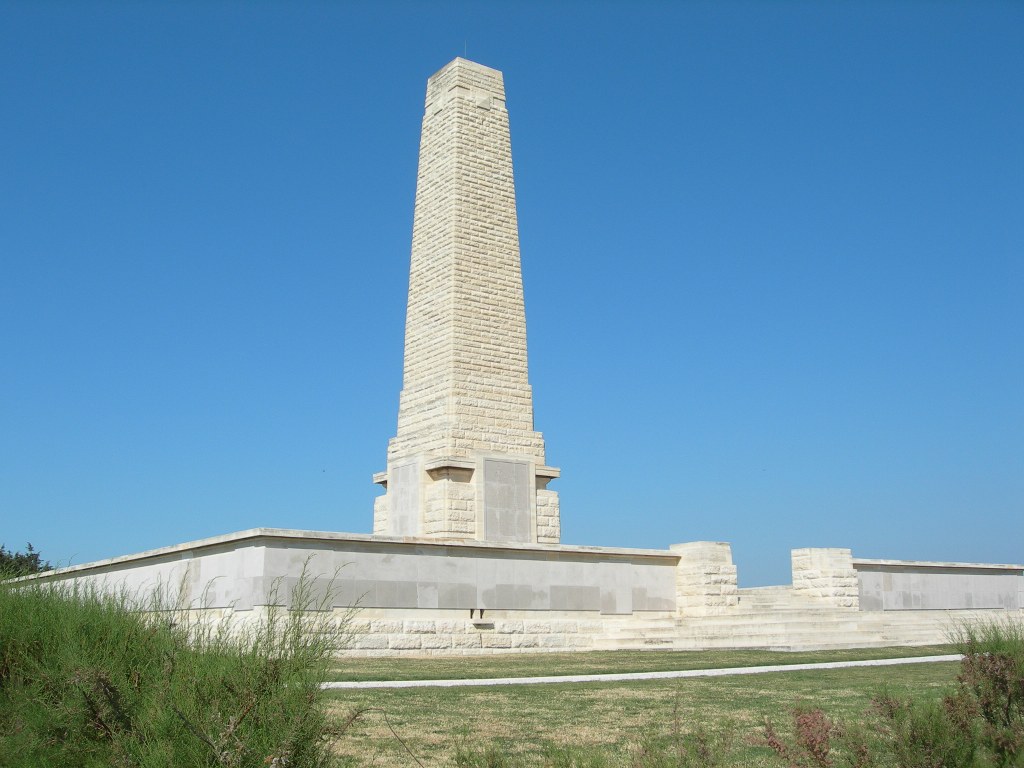 I have an “In Memoriam” from local Parisheners of St Aloysius Parish, Ardwick, Manchester. This seems to indicate that there was a war memorial in the Parish.

“In Memoriam of the members of St Aloysius Parish, Ardwick, Manchester  who served in The Great War 1914-1918. Judas Maccabaeus having collected twelve thousand drachms of silver, sent them to Jerusalem, for sacrifice to be offered for the sins of the dead soldiers” J. Stephenson 1919. W. B Taylor Typo Manchester. 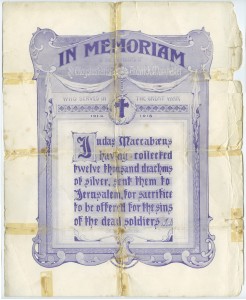 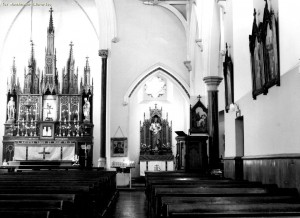 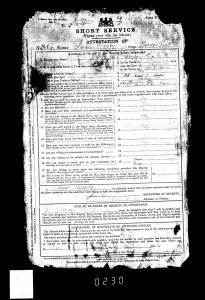